Mawson’s Huts are located at Cape Denison in Antarctica. They were constructed in 1912 as part of the Australasian Antarctic Expedition (AAE) and have survived the most brutal weather conditions on the planet.

The Mawson’s Huts Replica Museum is in Hobart and offers a fascinating insight in to the lives of the brave men who forged Australia’s exploration of the the great white continent.

Today, Hobart is Australia’s gateway for Antarctic scientific research and exploration. Australia’s Antarctic Division is based in Hobart.

It may come as a surprise that Hobart is closer to the equator than it is to Antarctica. I’m not sure I’d thought about it before, but that fact astounded me. Looking at the atlas it looks true.

There was not one qualified carpenter amongst the group.

The efforts of the AAE form the basis of Australia’s 42% land claim in Antarctic territory today.

The expedition landed at Cape Denison after a stopover at Macquarie Island, some 2473 kilometres from Hobart and the closest Antarctic land mass to Tasmania.

Mawson’s Huts Replica Museum is small but it is jam-packed full of Antarctic exploration goodness. The museum is operated by volunteers and all entry fees and donations go to the Mawson’s Huts Foundation (mawsons-huts.org.au).

Inside the museum, you can walk through at your own pace. There is loads of information, including maps, videos, biographies, stories, artefacts and a replica of inside the expedition base, sleeping quarters and possessions, plus Mawson’s personal quarters. 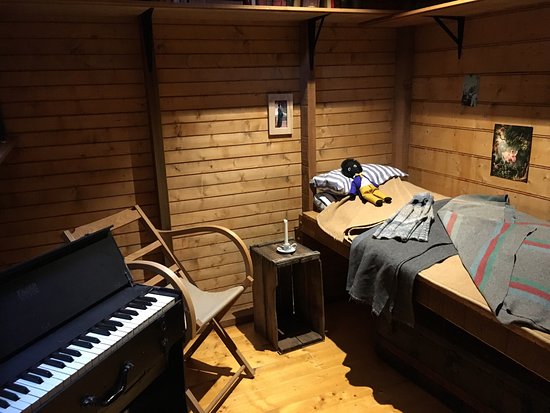 Despite its compact size, the museum provides a lot of fascinating information about Mawson and his AAE expedition of 1911 and their two year stay in their huts at Cape Denison. Mawson’s Huts were the first Australasian home on the big white continent.

There are short biographies of each expedition member, as well as the duties they performed, plus the names and characteristics of the huskies and why they were so valuable to the expedition.

Reading the biographies, I found it intriguing how many of these young men returned home, only to go off to war in World War 1, and in many cases, play vital roles during the war and later in life. I guess some people are just talented individuals.

Through a rare 10-day spell of fine weather, the men constructed huts with a living area and a workshop. Strategically, the huts utilised boulders as a barrier around the foundations, which ultimately proved to be a masterstroke.

Upon completion, the men were unaware that they had just built their huts on the windiest sea level location on Earth! Warwick, the man at reception, told me that these katabatic* winds have since been recorded at an incredible 400 kilometres an hour. Even your Maserati doesn’t go that fast!

The replica hut is constructed using Baltic pine, amazingly from the same sawmill in Finland that supplied Mawson’s expedition that has withstood the elements at Cape Denison for over 100 years.

As part of the expeditions scientific and research program, Mawson was part of the three man “Far Eastern Party” sledging expedition with Xavier Martz and Belgrave Ninnis and their pack of huskies. They headed east on 12 November 1912.

Douglas Mawson was the sole survivor from their fateful eastward venture.

The expedition turned into a disaster. On the return journey to the huts after weeks of exploring and information gathering, Ninnis and six sledge-pulling huskies fell down a crevasse with much of the team’s food supplies.

After Ninnis’ and his huskies tragic demise, Mertz and Mawson were forced to kill the remaining huskies one by one to feed themselves and the other huskies. The extreme weather halted their progress for days, with Mertz becoming ill and later dying. Mertz most likely died of vitamin A poisoning from eating the dogs’ livers.

Having risked his life to stay and nurse his colleague, Mawson now faced the prospect of making it back to base on his own.

This led to the ultimate survival story for Mawson, trekking solo for weeks with minimal food supplies. Surviving his own fall down a crevasse, his life literally and figuratively hanging by a rope, willing himself on despite the incredible winds and extreme cold, and being near starvation.

One could say, his story is a supreme example of history being written by the winners.

Mawson narrowly missed the Aurora’s departure for the return voyage to Hobart due a blizzard that kept him held up in a cave for a week. Luckily for him, six of the AAE had volunteered to stay behind and continue searching for the missing expedition party.

When Mawson eventually, yet miraculously, made his return to the hut, he was greeted with “Which one are you?”

After the remaining group was rescued from Cape Denison in 1914, after their second Antarctic winter, the huts and the personal possessions lay undisturbed for near on six decades, buried deep in snow and ice by the katabatic winds.

*Katabatic winds are downslope winds flowing from high elevations of mountains, plateaus, and hills down their slopes to the valleys or planes below.

Now that I have learned more about the story of Mawson’s return to Cape Denison, I am amazed it is not more widely known, appreciated, even revered, in the tales of heroic survival stories.

Sir Douglas Mawson was honoured with his image adorning the Australian $100 note. This note is now out of circulation.

The story of the entire expedition should be Australian folklore. The Australasian Antarctic Expedition is today regarded as one of the greatest polar scientific expeditions because of the detailed observations in magnetism, geology, biology and meteorology that were made.

For your viewing pleasure, take look at this documentary on the building of the replica hut.

This site uses Akismet to reduce spam. Learn how your comment data is processed.